Friedrich­shain, a neigh­bor­hood in former East Berlin, is a street art won­der­land, espe­cially if you’re into sten­cils, posters and paste ups/cut outs. Like a few other dis­tricts in Berlin, Friedrich­shain is subject to rapid change and street art dis­ap­pears quickly. One word: hurry.

I’ve col­lec­ted a few loc­a­tions in Friedrich­shain that can be easily visited and offer clusters of note­worthy street art. Please keep in mind that there’s much, much more to see. This col­lec­tion is neither com­plete nor fair – it’s basic­ally a list of my favor­ite places. Do not hes­it­ate to shout at @fabianmohr if you miss great street art loc­a­tions in this list.

If you want to visit every loc­a­tion I recom­mend coming with a bike. You can pick only a few loc­a­tions and walk, of course. Best entry points: S-Bahn Warschauer Straße or U-Bahn Samariterstraße.

This guide should work just fine on your smart­phone, so take it with you. Have a very old phone? Try the basic map to nav­ig­ate. If you prefer to play with KML instead (Google Earth comes to mind), you’ll find all loc­a­tions bundled in this KML-File. 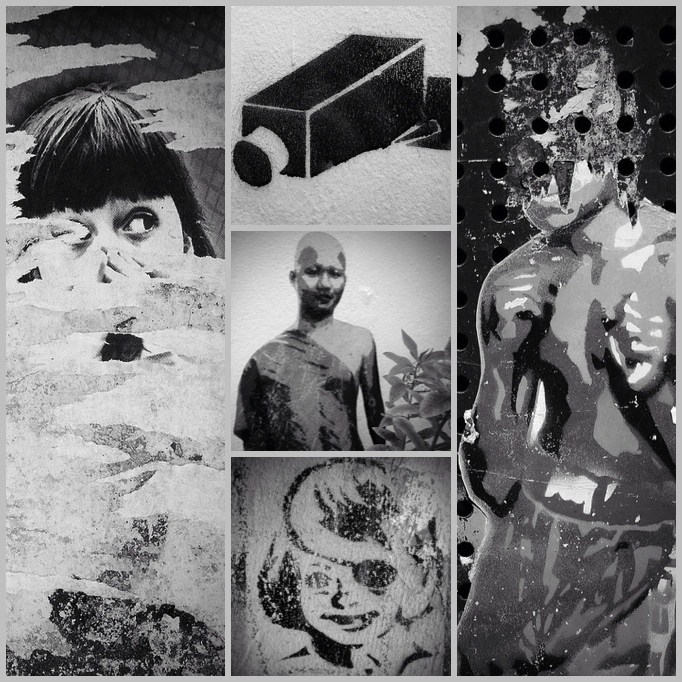 Turn right into Rigaer Straße and walk a few steps until you reach a Lidl super­mar­ket. The build­ing across the street has some inter­est­ing street art on the front­side but even more stuff is waiting in the backyard. 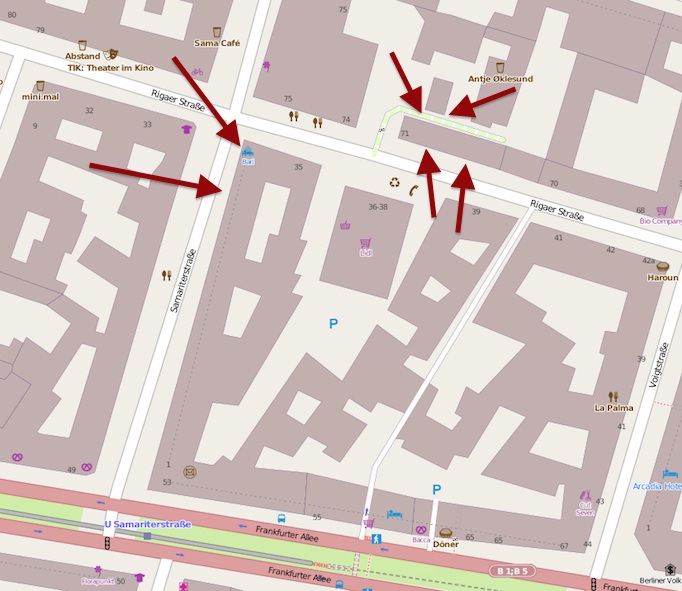 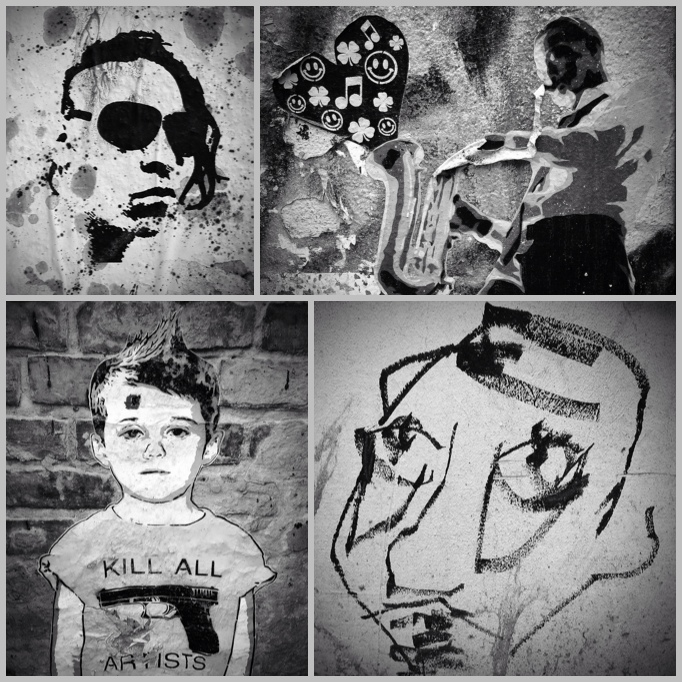 Turn west and walk down Rigaer Straße until you reach a big school build­ing (Heinrich-Hertz-Gymnasium) plastered with sten­cils and other stuff.

Walk on to the corner of Rigaer and Liebig­straße – you will find lots of dif­fer­ent mural artworks.

By now you’ll have noticed you’re in a former squat hotspot – most of the houses were occu­pied in the early 90s and have been evicted since then. 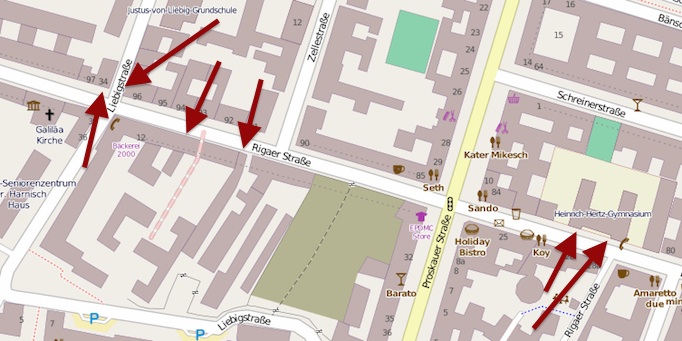 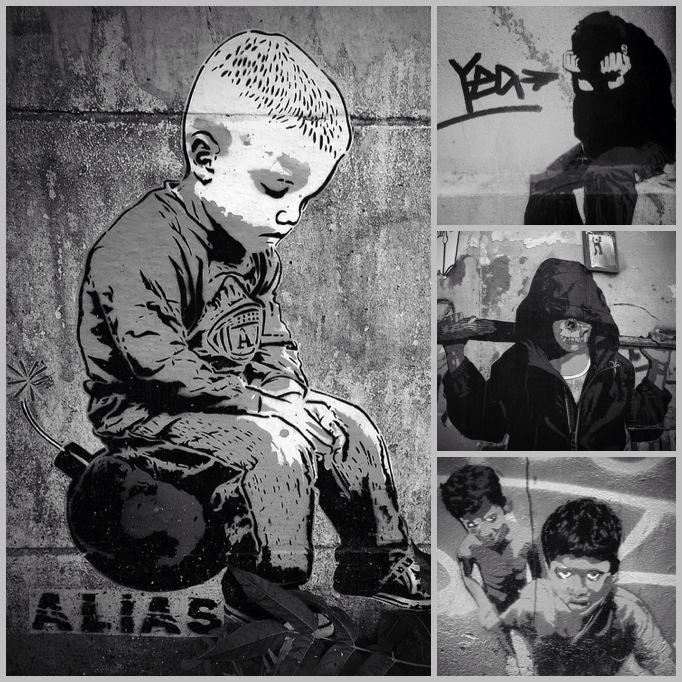 Coming from U-Bahn Samar­iter­straße it’s only a minute down Mainzer Straße to Scharnweberstraße.

Right at the corner is a once beau­ti­ful, now run down house with many pieces of street art on both sides.

Most cut outs and sten­cils are in a state of decay due to weather and being buried under posters count­less times. (Update: As of March 2015, this house is in recon­struc­tion mode. Most street art pieces have been removed.)

Follow Scharn­weber­straße to a squat at the corner of Col­bestraße (great cut out with a guy holding a base­ball bat) and further down the road to the corner of Kin­zig­straße – that house is worth a look, too.

Don’t miss the two boys a few meters into Kin­zig­straße on the left side. 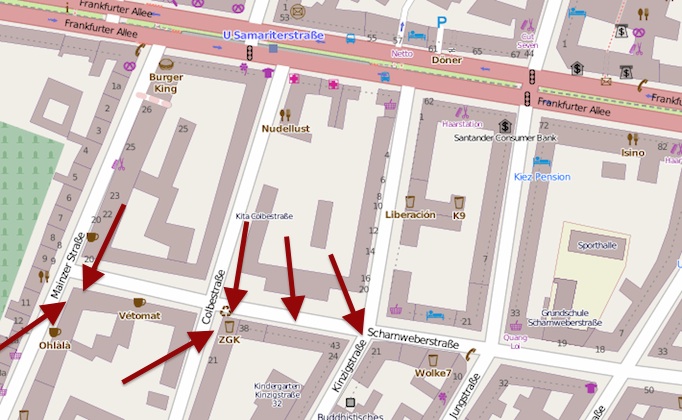 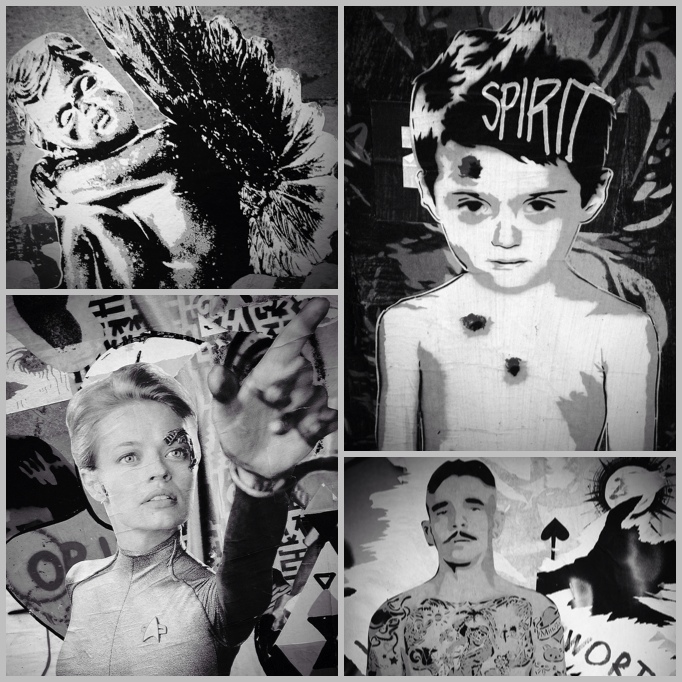 I check this place at least once a week and it’s always fun to dis­cover new pieces.

Have some time left? Walk a few meters down Box­ha­gener Straße and turn into Kreutzi­ger­straße – on the right side is a beau­ti­fully painted squat. 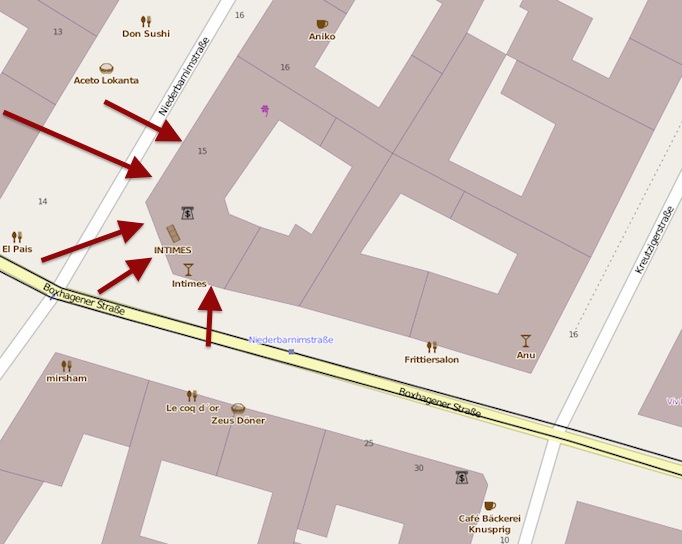 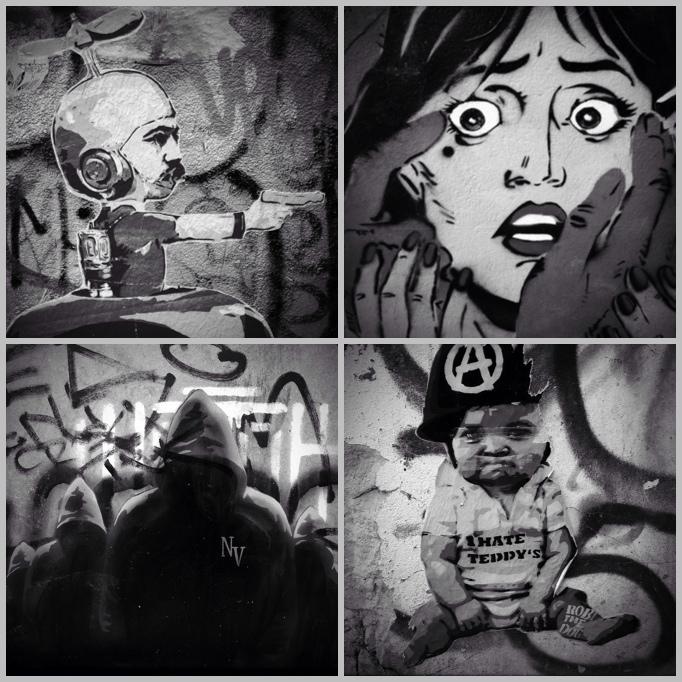 Walk down Dirschauer Straße south­bound on the left side and check the arch­ways for more lovely stuff.

There’s lots of tagging, too, so be sure to take a closer look. 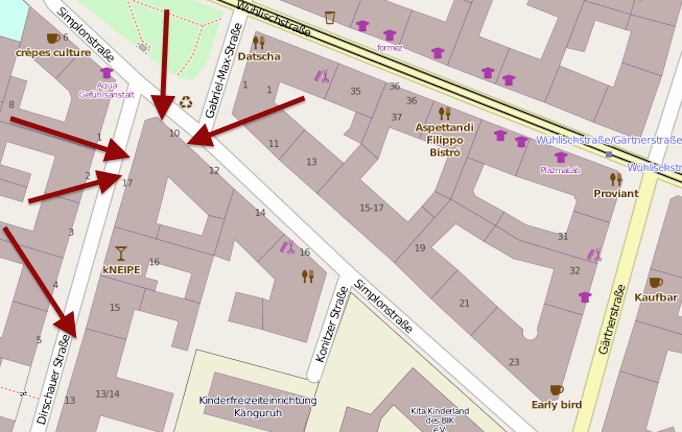 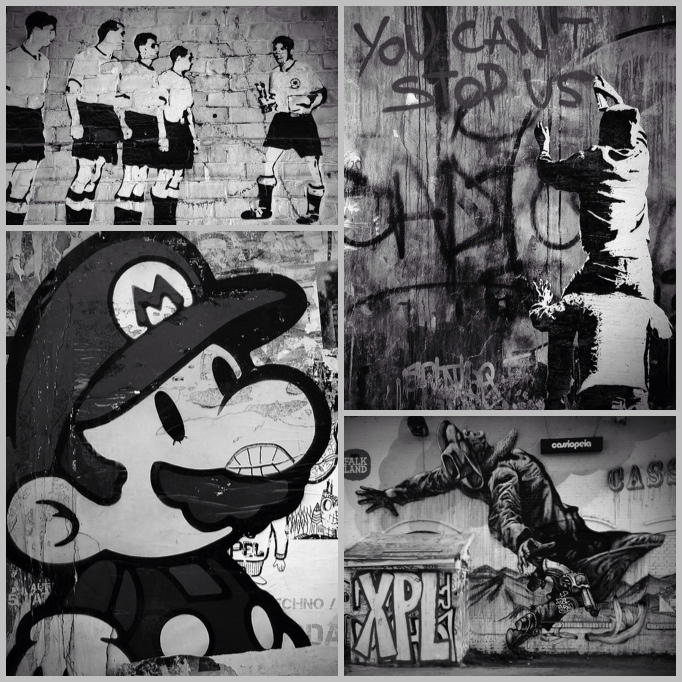 RAW area near S-Bahn Warschauer Straße is by far the biggest cluster of street art in all of Friedrich­shain – a must see.

Make sure you take your time to explore RAW area (a former railway repair facil­ity) in its entirety. 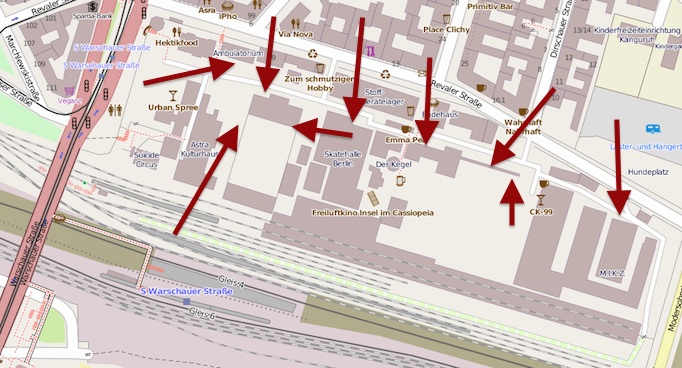 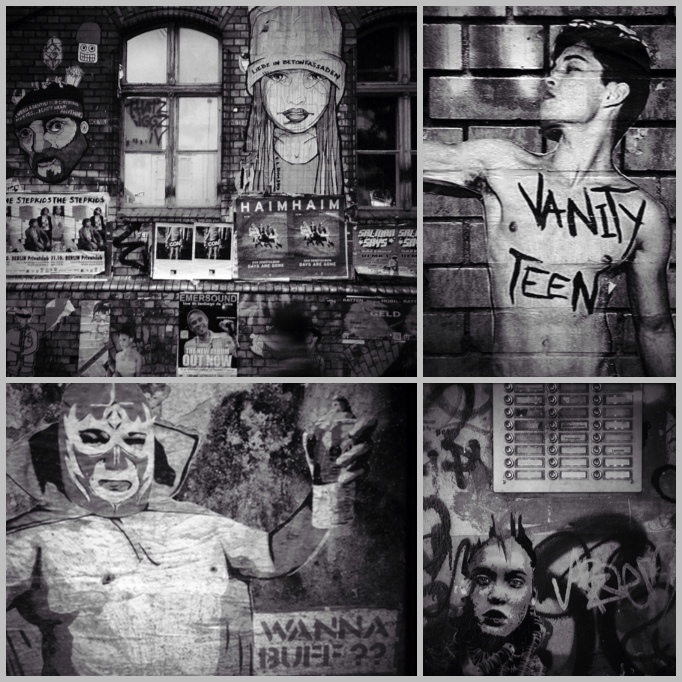 This street has ter­rific art­works on display – most of it on the north side between cafes and restaurants.

The former RAW admin­is­tra­tion build­ing across the street from Libauer Straße is plastered with cut outs as well. 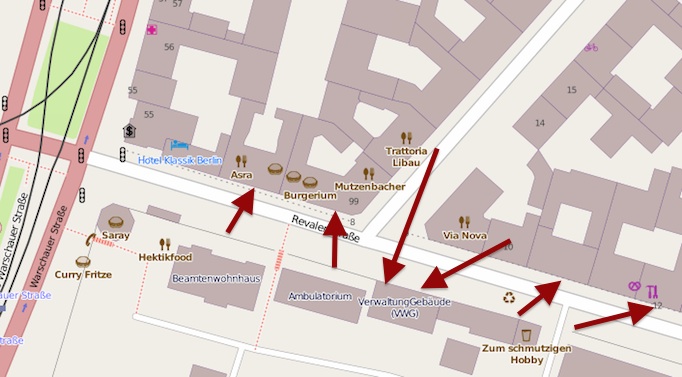 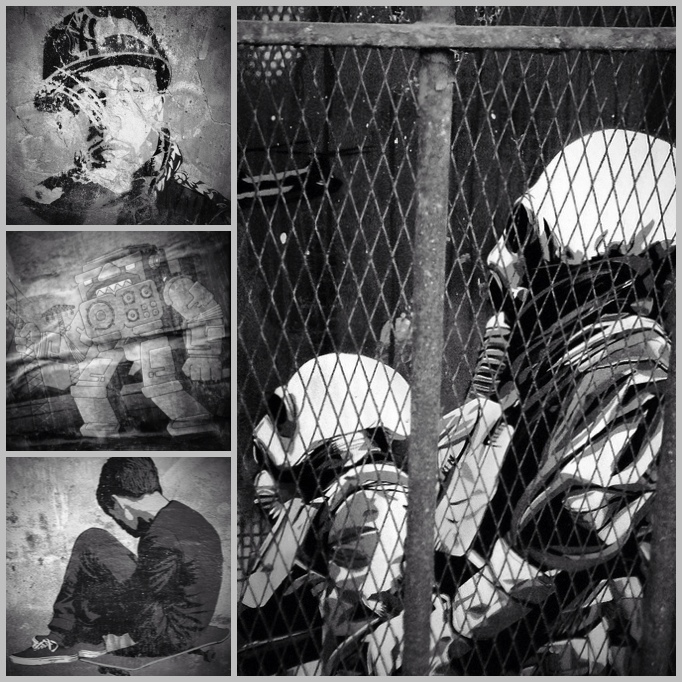 Not the loc­a­tion you’ll likely stumble upon when vis­it­ing Friedrich­shain for the first time.

A ten minute walk from Ostkreuz, Wiesen­weg is a quiet street in a com­mer­cial zone near Lichtenberg.

The first build­ing to the right (at the corner of Gür­telstraße and Wiesen­weg) has some amazing stencils.

Be sure to walk on to the corner of Tas­dor­fer Straße. Lots of classic graf­fiti here. Don’t miss the two men with gas masks – hidden behind sou­ter­rain window bars at the Subland building.

Q: I can’t find the street art you’ve men­tioned. Why?

A: Many cut outs and sten­cils aren’t big and can be over­seen between posters and other graf­fiti. Look closely and don’t forget the arch­ways. Moreover, street art is subject to weather and van­dal­ism as well as unwanted destruc­tion –  great stuff can be in a state of decay or may have dis­ap­peared com­pletely. Please keep in mind this guide was written in October 2013 (aka “the past”).

Q: Why don’t you cover other neigh­bor­hoods in Berlin? They have great street art, too.

A: I bet they do. I started in Friedrich­shain and I’m still not fin­ished here.

Q: May I use your street art pho­to­graphy in my blog, on Face­book, Twitter, Google+ or Pinterest?

A: Yes! All pic­tures are being pub­lished under a Cre­at­ive Commons (CC BY-NC-SA 2.0) license. You’ll find the com­plete geo­coded col­lec­tion in this Flickr set.

Q: Which soft­ware was used for cre­at­ing the photo collages?

A: Diptic for Mac. There are also ver­sions for iOS and Android.

Q: Are there any online resources about street art in Berlin?